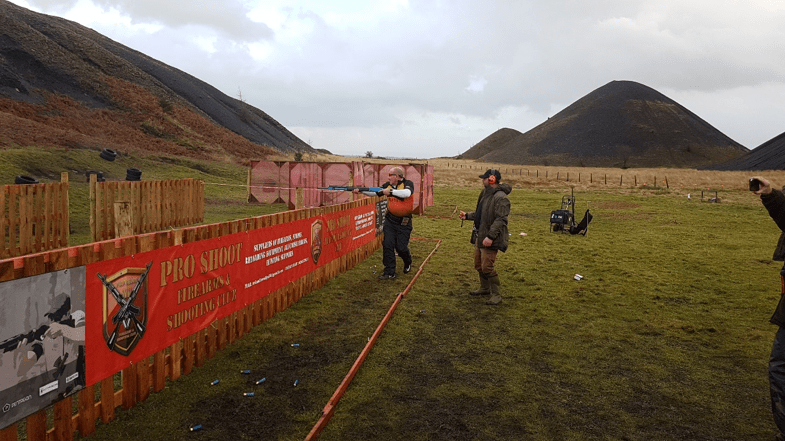 A welcome in the hillside.

From the UKPSA Wale Regional Rep.

I left home at 07:00 on a cold and wet Sunday morning in early December to attend my first PSG club match at Pro-Shoot’s new range less than 5 miles north of Caerphilly which up to now was mostly famous for its cheese and castle. 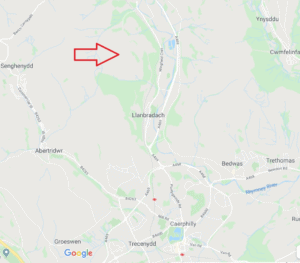 The range is situated on top of a large hill (Red arrow above) on which the Coal Board had been dumping millions of tons of non-toxic mining waste. Figure 2 below shows two berm shaped slag heaps in a ‘V’ shape approximately 600 meters long and 35-40 meters high and three cone-shaped slag heaps, the largest about 100 meters in diameter and 35-40 meters high. The white arrow indicates the direction in which the next picture (fig3) was taken which shows Jon Jennings and Brian Llewellyn shooting stage 2 of 9 flanked by the southern berm on the left and the three heaps in the background. The red line indicates the 600-meter rifle range (obviously not active at the time).

There were around 25 shooters attending the match with about 10 very familiar faces (to me) from the National competition circuit.

The match started around 10:00 with the weather at the time best described as inclement with some sunny spells intermingled with heavy rain, hail and sleet. Fortunately, the Pro-Shoot range crew had managed to erect a couple of ‘pop up’ gazebos (fig 5) which offered some cover while we ate the burgers and hotdogs beautifully cooked by Stuart during the welcome lunch break. There was also tea available and a welcome fire to warm the extremities by (fig 6-7). Ammunition (fibre wad only) was also available at a reasonable price.

The stages were varied and fun to shoot and I think everybody enjoyed themselves. I had to leave in the early afternoon to attend my diabetic dog but I believe the match went on until almost dark at around 16:00. All in all, a good day out, despite the weather. 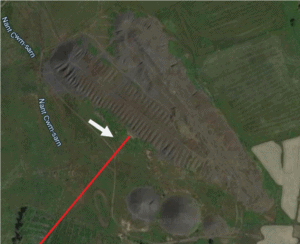 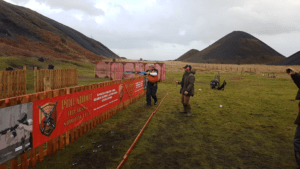 Fig 4. Jon Jennings and Brian a couple of seconds later. 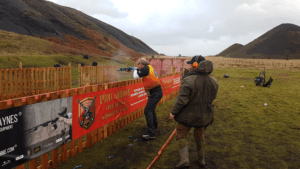 Fig 5. It never rains but it pours. 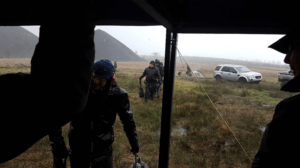 Fig 6. Dave Smith, Rob and Mark having a warm 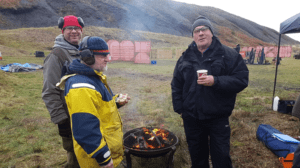 Fig 7. Brian trying to dry himself faster than he was getting wet. 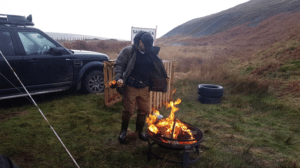 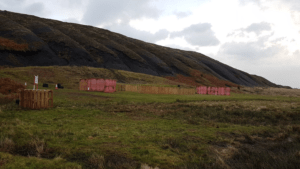 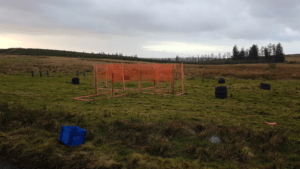 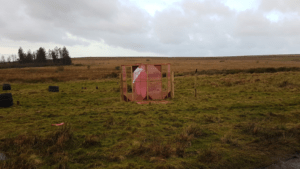 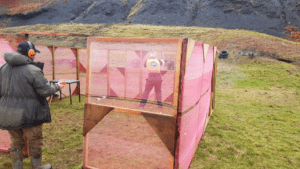 More about the range and Pro-Shoot Fire Arms.

The range is very accessible (or will be when the range access road is finished) at only:

Brian Llewellyn is a registered firearms dealer, owner of Pro Shoot Firearms and Shooting Club and operator of the range for which he has big plans.

This HO approved club is split into several sections and has approximately 230 members which caters for target shooters (up to­­­ 600 meters range), Deerstalkers, Air gunners and Practical Shooters. Currently, the Practical section boasts around 90 members­­­.

The Club expects to host several NRA matches each year as well as to accommodate up to three club PSG (and later mini-rifle and LBF) matches and one L1 match every month during the season, with two L3 matches when the planned facilities allow. The potential for this range is substantial.

The club will be offering one long gun safety course every month starting in January 2020 (subject to demand).

Accommodation and food are available on-site in a Farm House that can sleep 12 and another 6 more if you don’t mind sleeping in sleeping bags. If hotel accommodation is more to your taste the range is about 10 minutes from two Premier Inns, as well as several other hotels, Inns and of course, numerous B+Bs in nearby Caerphilly.

More information about Pro-Shoot can be found here.