As ever with any match no matter how big or small there are only a few who are willing to step up and give their time and effort to build and run it. Last year at HTRPC we paid for the match to be built which was a godsend to those who normally slave away at it!

With the range tidying and some minor tree works to recover lost targets completed it was build time.  With 119 competitors from 10 Countries including from Great Britain shooting a minimum of 154 rounds it was set to be a big match so the crew got to it.  Most was done before Friday, but as always there were a few last niggles and thanks has to go to our Greman and Danish chums arrived early and pitched in!

Come the day of the prematch and things were looking good, match built,  gazebos erected and the scoring programme primed and ready for input. We were spoilt by having enough Range Officers to run it as a match should be run with the help of a host of experienced international RO’s allowing us to have two per stage. Some of the French Range Officers even set up an embassy on their stage and were heard enquiring about passport validity though it was mainly to the Welsh!

There was the usual challenge that’s expected at a Level 3 match with the two long course stages causing much gnashing of teeth with poppers needing to be dropped to expose a clay target among others from a bridge to starting in the middle of a large square and needing to go to both rear corners as well as both sides and the front to engage targets.

The victors after the two days were:

Afterwards, we had what is rapidly becoming part of the norm at the British Masters and enjoyed a Merendero, that Italian picnic where everyone brings lovely foodstuffs from their home area and with such an international contingent there were some fantastic things to eat! 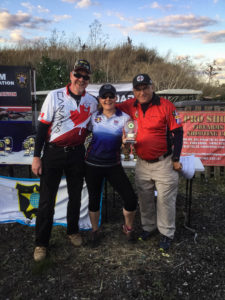 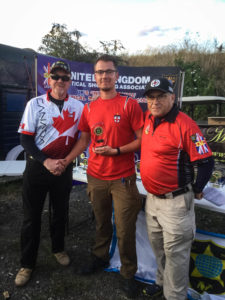 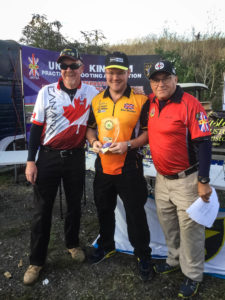 The prize-giving was the usual plush affair at Dartford being held in the car park between the container and horse box containing the generator but we did have a cracking prize table with some wonderful prizes donated by our sponsors:

Again a big thank you for such generosity!

So in conclusion, we got it built, we shot it, we had some food and prizes then we went home. Not a bad way to spend a few days. We were even lucky with the weather.