I want offer each and everyone in the National Range Officers Institute the best of the season, and to thank them again for all their work in 2019.

This year NROI members collectively delivered 16 level 2 and 3 matches for UKPSA members in IPSC disciplines like Shotgun, Mini Rifle and Action Air as well as in the GB only LBP/LBR discipline. UKPSA NROI members have supported IPSC matches outside Great Britain, across Europe, and in South America. Last, but certainly not least, our members also continued to make a significant contribution to the global work of the international sport governing bodies, IPSC and IROA.

We’ve also seen a number of our members being promoted to Range Master and Chief Range Officer and I would like to congratulate all again and to thank them for their work and dedication to our sport.

NROI members now need to send in their completed match record card for 2019 so we can recognise any level 1 matches and update their records. Simply photograph/scan it and send it to nroi@ukpsa.org

As you may notice we have adopted a new NROI logo. This reflects the new UKPSA logo and has been designed to allow its use on NROI branded clothing in the future (more on this hopefully in the New Year).

Like many of you I’m looking forward to another great season of safe shooting in 2020 including the Handgun World Championships in Thailand. The next World Assembly held in conjunction with this world championship will consider changes to the IPSC rules for all disciplines.

The NROI is already considering potential changes that the UKPSA region might want to submit to the IPSC Rules Committee and if you have any suggestions for changes or amendments to the IPSC rules for any discipline please can you let me have these by Friday 20th December at nroi@ukpsa.org

These will then be considered by the NROI committee before any final submissions are discussed and agreed by the UKPSA Council.

I would like to wish NROI members, and the competitors we serve, all the best for 2020. May all your times be good, your scoring easy and your DQs few!

Lessons from the line

The IPSC World Assembly this year confirmed the following interpretations of the rules which should be applied to all applicable disciplines.

Production Divisions – Appendices D4, D4a and D4b. In respect of Special Condition 18.4 and the expression “Aftermarket trigger assemblies”: A trigger assembly is defined as a mechanism that, once the trigger is pulled, activates the firing sequence of a firearm. Note that, if the original trigger includes a trigger safety, then the aftermarket trigger must also include a trigger safety. 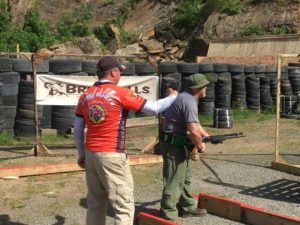 In respect of Rule 8.2.2.1, the barrel must be parallel to the ground.

We are preparing for 2020 with several NROI/IROA level 1 seminars already planned for the first half of the year. So far, we have potential seminars at North Cotes in March and at Carlisle in April (more details to follow). If you know someone interested in attending, or your club would like to host a seminar in 2020, please do get in touch with me at nroi@ukpsa.org

We also plan to run another IROA/NROI level 2 seminar in 2020. You can find more information about this interesting seminar which explores running a portion of an IPSC match as a CRO alongside course design and build on the UKPSA website. If you qualify and are interested contact me at nroi@ukpsa.org

The NROI are also exploring something new for 2020, a one day first aid course. More on this in the New Year!