In July I worked at the Level 3 Mini Rifle match at Silverstone Shooting Centre, a brilliant venue with a lot of 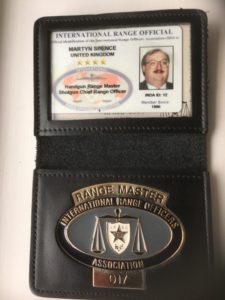 potential for the future. Along with many excellent match officials I had the pleasure of working with an old friend, who has returned to UKPSA after many years away. Before the handgun ban, he was a UK CRO and IROA member and a regular on the national circuit. As well as being pleased to see him back on the line I was hugely impressed that he could still fit in his World Shoot Ten red shirt!

As we enjoyed a well-earned post-match coffee and catch up, he showed me his original IROA membership card from the 1990s. Apart from a few grey hairs he looks like the young man I remember well – sad to say my own card just confirms the ravages of time!

There is still plenty of opportunity to get your red shirts on this season at UKPSA and IPSC matches. Both upcoming level 3 UKPSA shotgun matches still have room for volunteers and there are matches planned across a range of the other disciplines. There are also of course opportunities to work abroad, I know I’m looking forward to the European and South American Handgun Championships in the coming months.

The NROI is also planning another level 1 IROA/NROI seminar in October in Dartford (see details below) with more being planned for early 2020. If you think a friend or club member would make a great UKPSA RO why not pass on the details and encourage them to take part?

Lessons from the line

Watch that time 2
As recently mentioned, getting an accurate time is vital. This 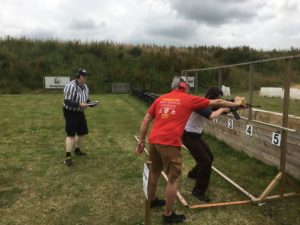 is not now as much a problem for Action Air where the best matches are investing in stop plates but is a real problem at Mini Rifle events particularly where some competitors are using a moderator and/or sub-sonic ammunition or there are barricades.

As well as noting the time in your peripheral vision with Mini Rifle, you will need to plan where you stand and position the timer so that you can catch that all important last shot.

Drop that hammer!
At a recent shotgun match some competitors shooting in Open Division were reluctant to drop the hammer during the unload. All match officials are reminded that this is not optional in Shotgun, and the IPSC rules are very clear on this! See 8.3.7.1 where the actions required are stipulated. All competitors must comply with no exceptions for division or gun type. Failure to comply on request should be considered Unsportsmanlike Conduct (see 10.6.1).

Use a tablet – scoring on a phone is fine for a club match but at level 2 or higher UKPSA matches tablets are the way to go!
Download data regularly (or use a secure Wi-Fi network) – don’t want to lose the vital data if your tablet dies.
Power up – keep an eye on power levels and replace or re-charge your tablet before it becomes a problem (and of course don’t forget to charge up your tablet overnight).
Back up your tablet – don’t forget to keep a paper record of the summary scores and time for each competitor.
Verification of scores – matches need to make suitable arrangements and facilities for competitors to check their scores if these are not printed.

Returning NROI members – more training and support
We want more UKPSA members to act as match officials and of course welcome the return of lapsed NROI members to the ‘Red Shirts’. But we want to help returning officials with support and training so they can return confident in their knowledge and ability. The NROI Committee have recently agreed the following new process based on how long it has been since people have been actively involved as a UKPSA/IPSC match official to help those returning to the sport.

1-year lapsed membership – for those who have missed one competition season they simply need to work one match as a supervised official to be reinstated to NROI membership. On successful completion any previously attained ranks are retained.

2 years lapsed membership – for those who have missed two competition seasons they need to work two matches as a supervised official to be reinstated to NROI membership. Again, on successful completion any previously attained ranks are retained.

3 or more years lapsed membership – for those who have missed three competition seasons or more they need to successfully complete an open book (online) exam on the IPSC rules and work three matches as a supervised official. On successful completion any previously attained ranks are retained up to and including the rank of Chief Range Officer. A former Range Master must successfully complete the level 3 seminar (if not completed previously) and work at least one of the supervised matches as an Assistant Range Master (under an experienced Range Master) before the NROI committee will consider for reinstatement to Range Master rank.

UKPSA Range Master – change to the match points requirement
Promotion to Range Master by the UKPSA NROI committee is guided by standards laid out by the International Range Officers Association (IROA) which recently increased the match points required to be eligible for promotion to 55. UKPSA Range Masters who complete the level 3 seminar in the future must have a minimum of 55 (total accumulated) match points on record, of which 41 must have been accumulated in level II or higher matches to be considered for promotion.

Feeling lonely on the range? Nominate a friend for RO training!
The next IROA/IPSC level 1 seminar will be led by experienced UKPSA Range Master Ken Trail at Dartford on 26th/27th October. If you know someone who would be a good RO, why not suggest they attend? Anyone interested in finding out more should contact Ken at k.trail@btconnect.com